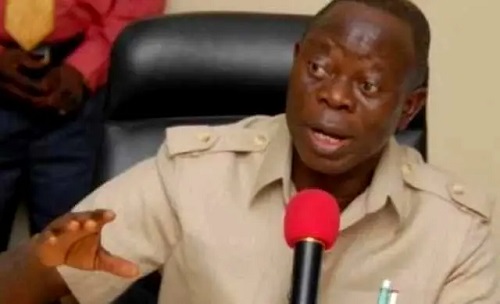 This came on a day the Arewa Consultative Forum, ACF, cautioned against election rigging and the use of thugs during the forthcoming general elections, even as it lamented that the Federal Government is too slow in curtailing terrorism in the country.

Oshiomhole, who is also Deputy Director-General of the Presidential Campaign Council, PCC, of All Progressives Congress, APC, had alleged at a citizens’ election dialogue on the theme,’’ What makes a good election in Nigeria,” in Abuja on Tuesday, had blamed governors for electoral violence witnessed in past elections.

But Okowa, who is also the presidential running mate of the Peoples Democratic Party, PDP, in the 2023 elections, said governors never participated in electoral violence, saying maybe, Oshiomhole did during his tenure as governor of Edo State.

Oshiomhole, who noted that governors funded thugs to perpetrate violence during polls, urged political leaders to support the efforts of security operatives to ensure the 2023 elections are violence-free.

Oshiomhole had said:  “When I was a governor and I mean this (you can ask former President Goodluck Jonathan), I did say at a meeting at the villa that sometimes governors contribute to election violence because AK-47 is not as cheap as buying akara.

“When you see many young men who are unemployed wielding AK-47s, who is providing them? So the political leadership has a responsibility, and we need to take that responsibility.

“If 500 voters choose to resort to violence, how many policemen do you want to deploy? Let us accept that as political parties, we agree that in the course of campaigning, at every point, we must emphasise that this election is about freedom to choose and that what is more important is the process, not even the outcome.

‘’We must also know that we (political leaders) have a role to play. If I go to my polling unit and say ‘it’s not a do-or-die affair, let the people vote freely’ and Dino (Melaye) says the same thing in his unit, our followers will not resort to violence.”

Noting that the weapons used by disruptors could not be easily obtained, the ex-governor lauded the efforts of President Muhammadu Buhari in tackling the nation’s security challenges.

He also praised the President for telling world leaders during the last United National General Assembly in New York of his administration’s commitment to conduct a free and fair election in 2023.

“Police sending two or ten men to a location doesn’t necessarily guarantee security. I’ve been a victim of election rigging, which was why I launched ‘one man, one vote’ because if it’s about the survival of the fittest, people like me can’t get elected.

“The ingredients for free and fair elections don’t just lie with INEC. Escorting the materials to make sure they’re not hijacked by hoodlums is a function of security and the president has a duty to ensure that the security forces are not only briefed that they mustn’t be partisan but also they have the support and logistics they need to discharge their responsibilities,” he added.

I don’t know what Oshiomhole is talking about — Okowa

But replying the former Edo governor yesterday, Governor Ifeanyi Okowa of Delta State said he does not know what he (Oshiomhole) was talking about.

Speaking through his Commissioner for Information, Mr Charles Aniagwu, Okowa said: “Perhaps that was what he did when he was governor.

“I think Oshiomhole is in a better position to explain that. Oshiomhole is a former governor. I don’t know whether he perpetrated electoral violence when he was governor.

“Oshiomhole should think of managing the abysmal performance of the APC, rather than trying to distract us with such accusations; he should come to the right lane.”

Contacted on the allegation, the Nigeria Governors’ Forum, NGF, declined comments saying that it does not play politics

NGF’s Director, Media and Public Affairs, Abdulrazaque Bello-Barkindo, told Vanguard: “Sorry, the NGF does not discuss or engage in politics. It operates on six core mandate areas, which include agric, education, security, infrastructure, health and policy.”

Meanwhile, the Arewa Consultative Forum, ACF, has cautioned against election rigging and use of thugs during the forthcoming general elections, even at it lamented that the Federal Government is slow in curtailing terrorism in the country.

Speaking yesterday at its National Executive Council, NEC, meeting in Kaduna, ACF’s chairman, Chief Audu Ogbeh, said the election is of great concern to ACF and prayed that Nigerians will elect leaders of their choice in 2023.

While commending the Federal Government and security agencies for the feat achieved in the last six months over insecurity, the ACF leader, however, observed that government is not fast enough in curtailing terrorism.

He noted that there is an improvement on the part of security agencies in the last six months in curtailing the activities of the criminals, but called for total elimination of banditry and other terrorist acts.

Ogbeh said:  “We want to tell Nigerians that the 2023 election is of great concern to us. ACF will not accept rigging and thuggery so that the choice of God and Nigerians’ will prevail.

“We call on the Independent National Electoral Commission, INEC, and security agencies to ensure law and order during the election. We are hoping and praying to Almighty God to give us the opportunity to elect leaders of our choice who will be the best materials to govern Nigeria.

“Another issue of great concern to us is insecurity. Insecurity is the biggest tragedy that has befallen the country in the last few years. However, security agencies have made tremendous efforts in curtailing the excesses of terrorists in the last six months.

‘’We look forward to their total elimination. But we regret that the steps taken by government were not fast enough.”

He expressed displeasure over the havoc caused by flooding across the country, and appealed to government to take steps to curtail the menace.

“Flooding has done a great disaster to agriculture and the people. So we call on the Federal Government to take steps to curtail flooding,’’ Ogbeh said.

Leading with a winning mentality 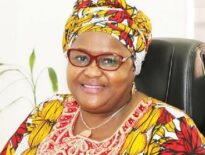 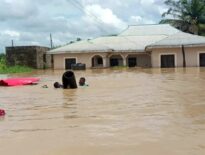